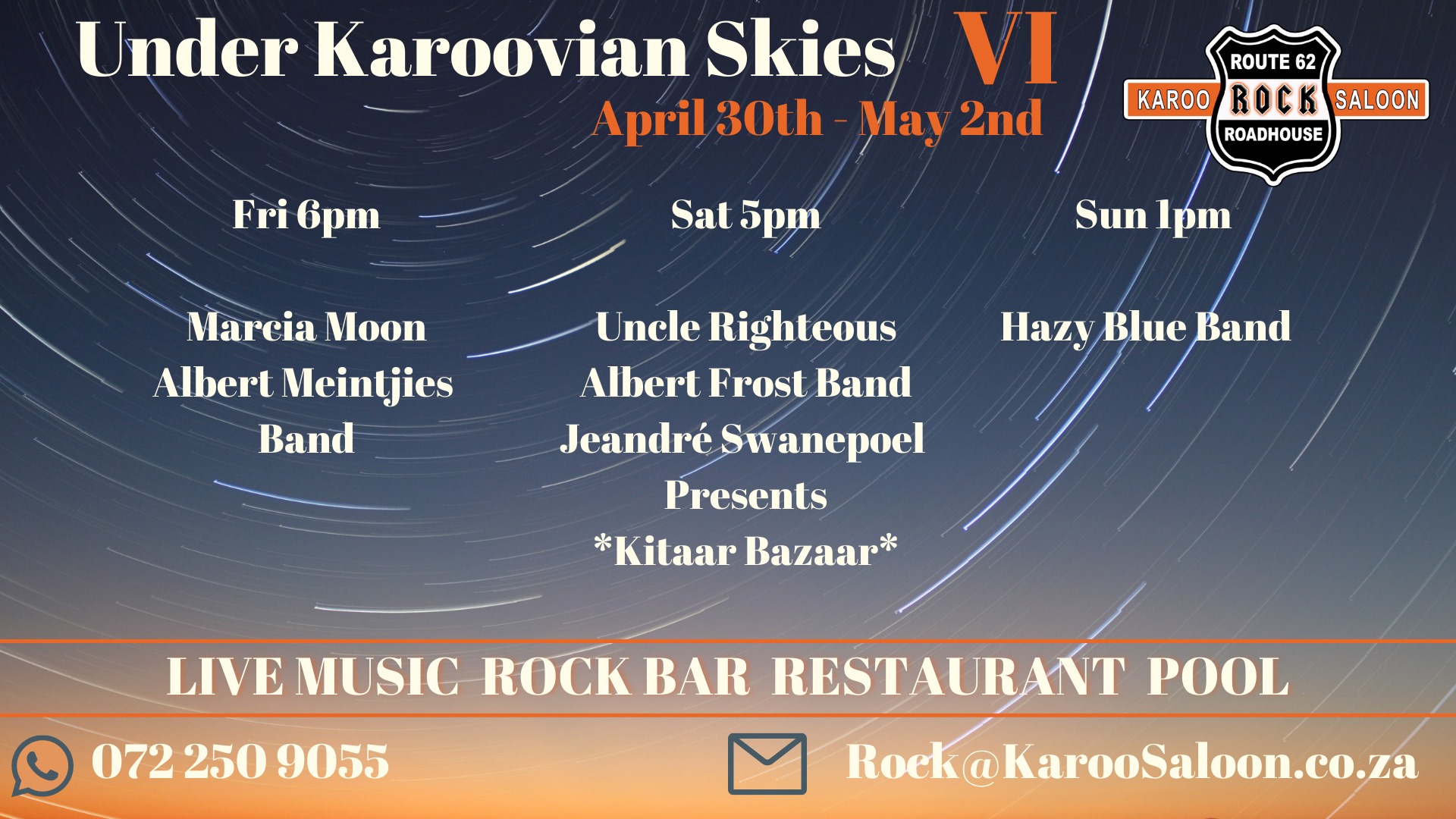 Home » Barrydale set to become the bastion of analog photography

If the organizers of the recently concluded Barrydale Analog Photographic Festival have any say in the matter, the Klein Karoo town will become the bastion for the conservation and development of the art of analog photography in South Africa.

“It can be to Barrydale what the annual book festival is to Richmond in the Northern Cape,” photographer, blacksmith, artist, collaborator and local consumer of all things pure and evil Herman van Wyk said at the conclusion of what turned out to be a hugely successful festival.

Van Wyk, who has over the years become an integral part of the social construct of Barrydale, has produced some of his finest work in the town he feels is comparable to a classic village in the south of France.

The artisan who once helped to construct a life size T-Rex named Lizzy that lit up Africa Burn skies was indeed taken aback with what his good friend and fellow photographer Graham Abbott managed to pull-off on a shoestring budget – with the coronavirus always threatening to completely ruin their plans.

“I think the festival was a fantastic thing that happened in Barrydale and the scale of it blew me away,” said Van Wyk

“I simply could not believe how many photographers actually participated and that made this quite big,” he said.

Some of the most famous photographers who are based in this country showcased their work at the Karoo Art Hotel. This included (but is not limited to) analog prints by Roger Ballen, Obie Oberholzer, Simon O’Callaghan, Oscar Gutierrez, Robbert Koene, Adriaan Oosthuizen, Sean Wilson, Rodger Bosch, Ryno Reyneke and Johan Wilke – the man in who’s honour the inaugural festival was held.

The rest of the exceptional works of art were on display at a custom-built exhibition house in Van Riebeeck Street – with thanks to the enigmatic Jonathon Rees who agreed to have his property transformed.

At the exhibition house some of Abbott’s own impeccable photographs hung in close proximity to a few Van Wyk originals while another room featured the one and only David Goldblatt.

The good news is that all the work in the Barrydale Analog Gallery or Spookhuis can be viewed on appointment throughout January – just phone Graham on 084 663 5990.

He was a relieved and understandably emotional man after the final curtain of the first Barrydale Analog Photographic Festival was drawn.

In addition to the world-class photographs that were on display, Abbott organized several interesting and insightful events that included wet-plate photography classes, Cyanotype workshops, analog printing workshops and movie nights.

Slide shows by Van Wyk (on the late Vusamazulu Credo Mutwa) and Rodger Bosch who vividly recorded his trips to Angola, further highlighted just how important the preservation of the dying medium is.

These talks, and the accompanying photography, were exceptionally well received. So much so that another night was set aside for Van Wyk’s insightful talk.

For Abbott and his friends who were involved in the planning of the festival, a form of sensory overload proved to be one of the biggest challenges as they had very little time in which to decide where all the amazing work would finally be presented.

Nonetheless, thanks in large to the great vision of Hopwood, they created a visual pageant that will go down as one of the best of its kind.

“From my girlfriend Nicole who has kept me alive over the last few months, to everyone who gave so much of their time and energy towards this festival I’d just like to say thank you!” Abbott said.

Reflecting on his first crack at organising such an important and prestigious event, Abbott said that it was difficult to find sponsorship due to the fact that there were so many unknown factors, but added that based on interest and the quality of work, finding sponsors that share his vision should not be a problem as preparations for next year’s festival get underway.

Abbott also took it upon himself to assist Johannesburg based jazz photographer Phumolo Nzunga with a few darkroom and analog shooting lessons. He also donated an enlarger to the budding shutterbug who returned to Gauteng a changed man.

While pointing out that the likes of Lynn Sawyer (events planner), Nicole Huke (his girlfriend), Hopwood, Rees and Van Wyk and Andrew Nunn were his pillars of strength (Rees had a hand in obtaining the Goldblatt and Ballen work from Johannesburg) he thanked each and every photographer who agreed to be a part of this revolutionary festival.

“As people saw that the festival was actually happening they wanted to be a part of it because it was a celebration of analog and I hope it will grow as just that,” Abbott said.

He was obviously over the moon when, on the first day of the festival, Pieter Badenhorst delivered and additional 50 analog prints from Cape Town.

Most importantly though, Abbott succeeded in his main quest and that was to honour the memory of Johan Wilke who had recently passed away.

“I think what really blew me away is that his ex-wife and daughter brought 10 of his prints to the opening of the exhibition and the greatest experience was to see his daughter participate in the hanging of his work.”

With the dust of a hugely successful analog photographic festival settling, Graham Abbott and his fellow photo geniuses have already started planning the 2021 event.

What News62 can reveal now is that it will again take place in December in Barrydale and that several world-class prints will again be on display.

However, what will be more important is the development of the next generation of analog photographers and on that front, Abbott hopes they had already inspired a few youngsters to take up the old school style of shooting and developing pics.

Abbott said that his Barrydale Photo Voice project will kick into gear during 2021 and that the work of previously disadvantaged photographers will feature prominently at the next event.

“Hopefully the youth will look at analog as a means of expressing themselves creatively as opposed to the press a button experience that they currently have,” Abbott said.

“I’d like to teach young photographers the analog way which is to be disciplined from the beginning. Not just shoot until to get something – you have to think about what it is that you are going to shoot.

Concentration and planning is what makes you a good photographer.”

“It (analog photography) was the tool that taught me photography,” he said.

“Digital is a different game. When you shoot with slides, for instance, you have a quarter of a stop and if you are out you have ruined the shot.

“You have to know what you are doing and that is why it is good to shoot analog occasionally, just to keep your edge up and just keep on point.

“We see thousands of images every day on our newsfeeds on social media, on our televisions and there is just so much visual information.

“And while people have become a little better at understanding these images, they do not always take the time to look at one image and really truly understand composition and purpose. Why the photographer shot in a certain way.”

“There is a lot more depth to it. We need people to take a step back and take more time and that is what analog does.”

Abbott highlighted that analog teaches photographers that they should be able to get the perfect shot without the luxury of post production tools like Photoshop.

He said it was about teaching the principles of an art form as opposed to a simple recording of an event.

“I think because of lockdown the youth have realised to look at thinks more in perspective. Everything is so AI (artificial intelligence) and so fleeting, and they are also hankering back to something tangible in life and that is why vinyl is also kicking off again.

“They are wanting to experience the limitations of a spool and the tangibility of having a mechanical instrument to produce the image instead of it being digital only.

Reflecting on the festival itself O’Callaghan, who has exhibited his work at many international analog shows was more than impressed.

“It came together on such an incredible scale with representation by some very important photographers. It was great collection of many photographers’ work.

“Something that has not been seen in South Africa in quite a few years, if ever”

He pointed out that not only world-class photographers were represented at the festival, but also master printers like Denis da Silva and Obie Oberholzer.

“It was in many cases not just about taking the pictures, it was about the whole process.

“What is so important about this festival is the amount of different photographers who participated and the quality of work, the names who have come forward and submitted work.

“It was not only the rock stars (the Ballens) of the industry but also the mid range photographers.

From my Barrydale base, my goal is to tell the stories of people and places on the picturesque R62. Ek het oor die jare 'n cappuccino verslawing ontwikkel en my hond se naam is Karoolus.